When the metal changes, two changes will occur when exposed to high temperatures, namely instantaneous changes and metallurgical changes. 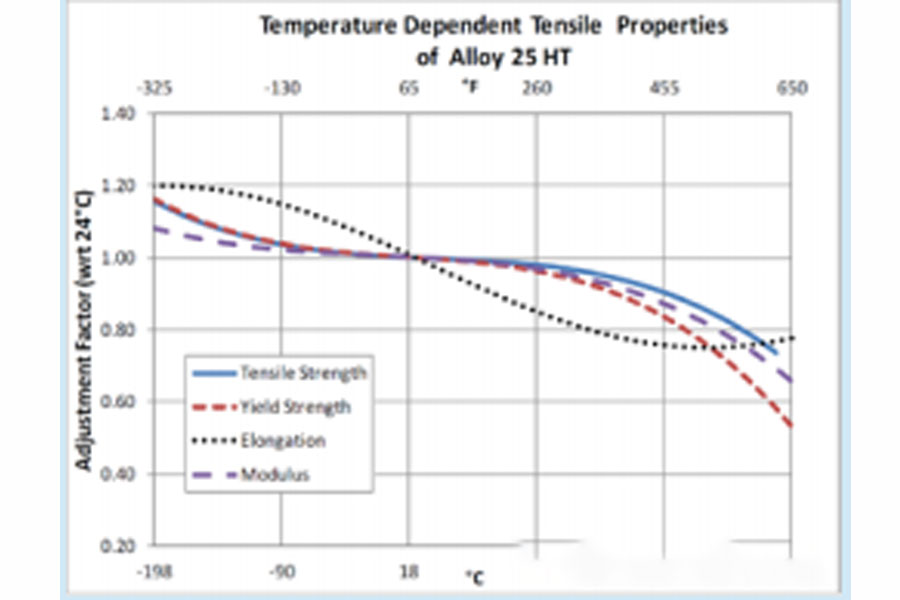 This graph shows the effect of temperature on the tensile properties of C17200 TH04 copper beryllium. For this test, the sample was heated to the required temperature and the test was performed to keep the sample at that temperature throughout the test. This test is an effective measure only for the effects of instantaneous changes and no metallurgical changes.

In this test, the tensile sample is heated to the desired temperature and kept for the specified time, and then it is allowed to cool completely to room temperature. Then perform the actual tensile test temperature indoors. This special test only measures the effects of metallurgical changes, not instantaneous changes.

Alloy 25 is a precipitation hardening alloy. The precipitation reaction starts at 500°F (260°C). Below this temperature, only transient and diffusion-based properties change. Please note that in these curves, the change is a non-linear function of time and temperature. The fact is that the curve is almost linear on a logarithmic scale and represents the time these changes are exponential functions. It is also noticed that in the early stage, the speed temperature change increases with the increase of the temperature difference, and it is stable. This stabilization occurs when the material is completely expired when the precipitation reaction is over.

These two sets of curves separate the instantaneous and metallurgical changes of the effect. In many applications, these two changes will occur simultaneously, further complicating forecasting. Especially performance at high temperatures when it comes to changes in metallurgy. Even when the high temperature phase transition cannot be produced, the stress can relax. You will need to carefully consider the materials used for any application that requires elevated temperatures to run for a long time. You may need to use finite element analysis to simulate the effects of time and temperature.

Alloy Is The Main Form Of Beryllium Consumption

The Applications Of Beryllium Copper

How To Clean The Surface Of Beryllium Copper

What is Beryllium Copper?

Can Copper And Steel Be Welded Together

The Bright Annealing Process Of Copper Alloy Strip And Wire

Why Ammonia Corrosion Are Common For Copper And Its Alloys

Since 1995,Wonder Copper is proud to own and operate six branches throughout China. Wonder Copper offers the broadest line of metals available from one distributor –beryllium copper Sheet&Plate, Flat bar,square bar,round bar,wire as well as a large line of specialty metals and accessories. This, coupled with the company’s service offering that includes cnc machining, forging and mold manufacturing, has allowed Wonder Copper to become a full service operation working with companies of all sizes.